I was recently playing with Azure Cognitive Services and wanted to test Sentiment Analysis of Twitter. In this blog post I will go through how to setup the different components and analyse the sentiment of Tweets that contain the Azure or AWS hashtag. We will then be able to compare the sentiment of Azure tweets versus AWS tweets and analyse if Azure is in a better spotlight than AWS, which country prefers AWS over Azure, get the most influential people, and many more things that would be hugely beneficial for any social media marketing team.

For this solution to work we will need the following Azure Services:

Granted, I could have skipped the database step and stream from logic apps directly into Power BI but that will be for another blogpost.

First create a new Azure SQL DB and open the query editor to create the table: 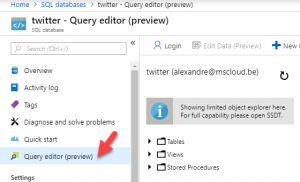 Run the following SQL query to create the table for Azure

I then run the same command to have a table for AWS tweets.

We will need Azure Cognitive services to analyse our Tweet and detect the sentiment of the tweet. The Text Analytics API, which is part of the Cognitive services, is a cloud-based service that provides advanced natural language processing over raw text has 3 main components: sentiment analysis, key phrase extraction, and language detection. There is a 4th component which is in preview now called Entity recognition which identifies and categorize entities in your text as people, places, organizations, date/time, quantities, percentages, currencies, and more. Well-known entities are also recognized and linked to more information on the web.

For this blog post we will focus on the Sentiment analysis which uses a machine learning classification algorithm to generate a sentiment score between 0 and 1. Scores closer to 1 indicate positive sentiment, while scores closer to 0 indicate negative sentiment. The model is pretrained with an extensive body of text with sentiment associations. Currently, it is not possible to provide your own training data. Currently, Sentiment Analysis supports English, German, Spanish, and French. Other languages are in preview. Sentiment analysis produces a higher quality result when you give it smaller chunks of text to work on. This is opposite from key phrase extraction, which performs better on larger blocks of text. ou must have JSON documents in this format: id, text, language and document size must be under 5,000 characters per document, which is not an issue for our Tweets. From a pricing point of view its literally a few cents per 1000 API requests. 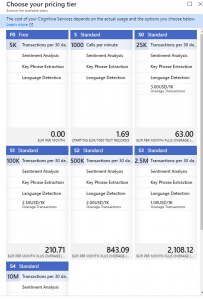 We will need an API key for the logica app to connect to Azure cognitive services. Get the key for the Text Analysis API here: https://azure.microsoft.com/en-us/try/cognitive-services/my-apis/?api=text-analytics

If you click the Twitter step, it will ask you to configure a connection to Twitter. Specify your credentials. Then enter the appropriate values regarding keywords and interval. I set the interval to 3 Minutes and specify the #Azure hashtag. If you want near real time analysis you should lower this value but the more actions are executed the more you will pay.

Next add the sentiment action to the workflow.  First you have to specify the keys you created earlier and give the new connection a name. Then you need to specify the “Tweet Text” from Dynamic content 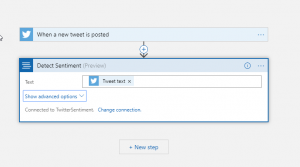 As a result of this we will now have a sentiment, or a value ranging from 0 to 1, that we can insert in our database. Add a new action to insert a row in the database. Establish a connection to a specific database first.  Then specify the table (AzureTweets, in my case) and pass the values , again taken from the dynamic content like the Tweet Text, the author, location and sentiment. 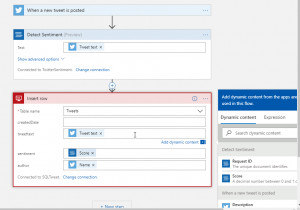 After a while you should see some tweets coming into our database:

Do the same steps mentioned above for AWS.

Now that we have our tweets and sentiment in our SQL Database we can create a nice looking dashboard to visualize the sentiment. 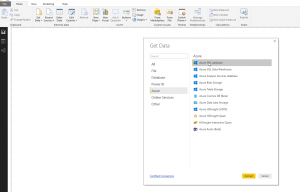 Specify servername and database name and choose “Direct Query”. This way the data shown by the report is taken directly from the database

Press “advanced options” to be able to run a T-SQL query on the data to adjust it before using it in your report. 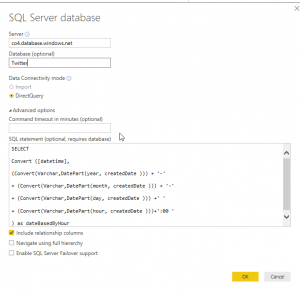 Now that we have the data in Power Bi we can start building our dashboard.

Now create a “Line and clustered column chart” as seen below. Activate the values “datebasedbyhour” and “id” and “sentiment” as shown below. Make sure you’re using “Average of sentiment” (not sum) as column value and Count of id (not sum) as a line value. 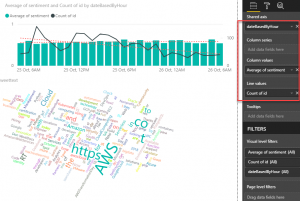 Next add the “Filled Map” and select Location as Location and for Color of saturation add “average of sentiment”. We can clearly see that people in North America and Africa are more positif feeling than people in the US for example. 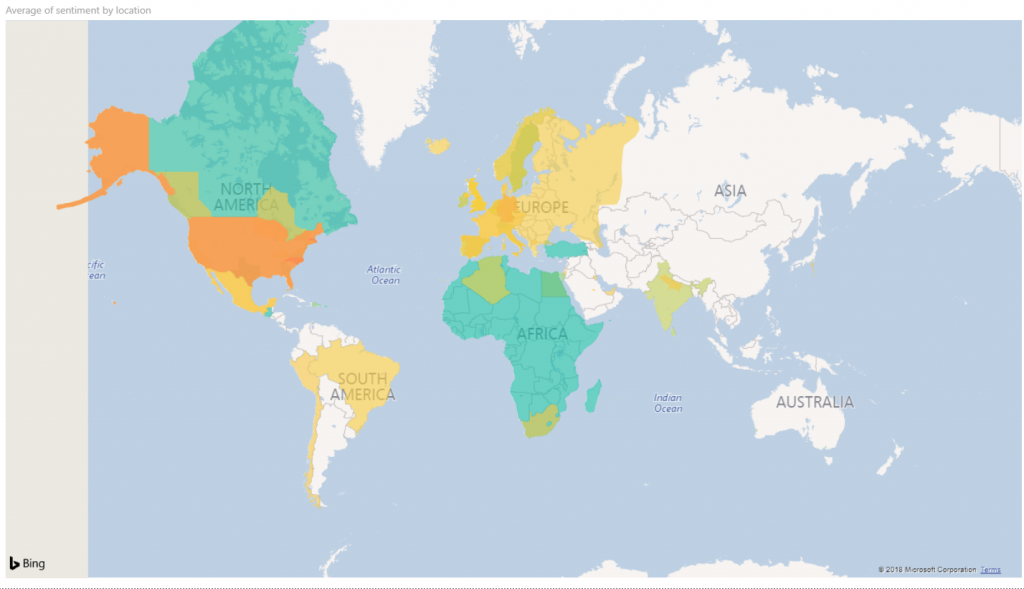 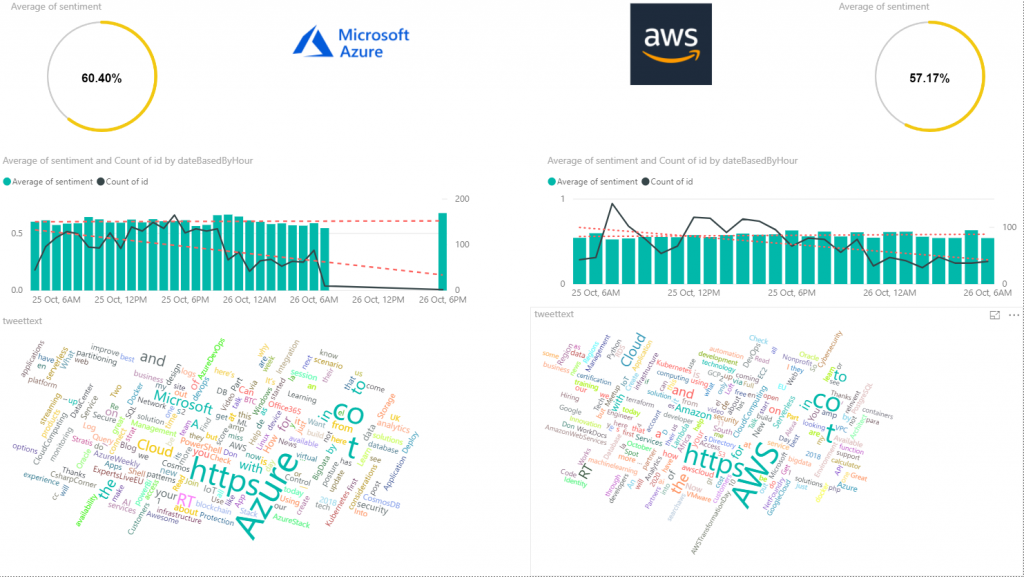 That’s it folks! You can download my Power BI report file from here.

You may also enjoy

With more and more of our development and infrastructure projects being built and released via Azure DevOps, I find myself creating a few DevOps projects whi...

This is the curious case of an Azure Application Gateway showing no metrics and logs at all. Even thought this was one of the main customer’s production Appl...

There are currently 2 developer portals for the Azure API Management service: a legacy portal and the new portal experience. We deployed our Azure APIM insta...

I was recently looking at a way to automatically set an Azure AD group as the SQL admin for our Azure SQL databases with ARM tempplates. We use SQL authentic...